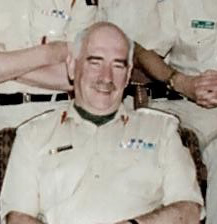 May he Rest in Peace

A native of Limerick, Gerry McMahon entered the Cadet School in 1953 as a member of the 28th Cadet Class. He was commissioned into the Infantry Corps in November 1955 and was posted to 6 Infantry Battalion, Athlone. Between commissioning and 1969 he spent most of his service in the Western Command. Having completed a Staff Course in Camberley he was posted to the Military College in January 1970 where he served in the Cadet School, the Infantry School, and the Command and Staff School. In 1975 he was awarded a Batchelor of Arts degree by University College Dublin in Economics and History. He served as Executive Officer of the General Training Depot before moving to Operations Section in Defence Forces Headquarters. He was Officer Commanding 5 Infantry Battalion in Dublin in the mid-80s and on promotion to Colonel was appointed Director of Planning and Research. He returned to the Military College as its Commandant on promotion to Brigadier General in 1992 and then served as Quartermaster General on promotion to Major General in 1993. He was appointed Chief of Staff with the rank of Lieutenant General on 8 February 1995, an appointment in which he oversaw a period of major reorganisation in the Defence Forces. He served overseas with 37 Infantry Battalion in the Congo, 21 Infantry Group in Cyprus, 44 Infantry Battalion in the Lebanon, as an Observer with the United Nations Truce Supervision Organisation in the Middle East and in UN Headquarters, New York. He retired on 22 August 1998 having served in the Defence Forces for forty-five years.

Removal on Tuesday morning at 9.15 o’clock to arrive at Cill Mhuire, Ballymany for Mass at 10 o’clock. Funeral afterwards to Newlands Cross Crematorium. Family flowers only please. Donations, if desired, to the Organisation of National Ex-Servicemen and Women.