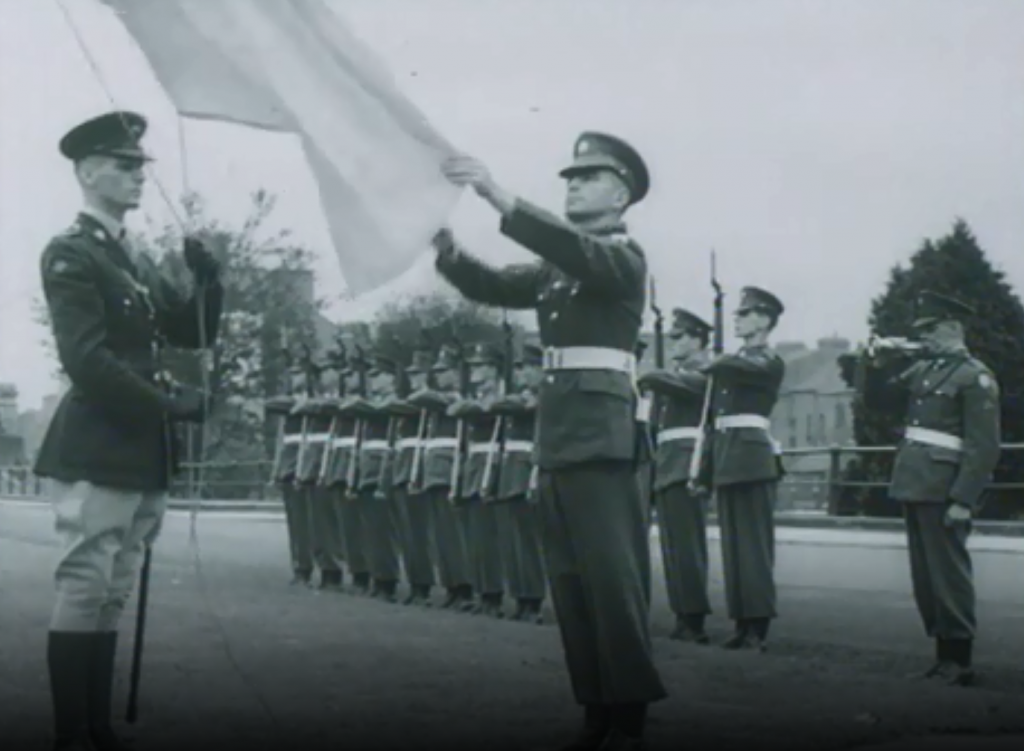 ARCOIreland regrets to inform its members of the death of Colonel James (Jim) Mortell of Stamullen, County Meath and late of Charleville, County Cork. On 13 November 2018, peacefully, in the care of St Gladys’ Nursing Home, Harold’s Cross. Beloved father of the late Erika. Very sadly missed by his loving family, sons David and Alan and their mother Jennifer, daughters-in-law Yukie and Eimear, adored grandchildren Amélie and Will, brothers Michael, Philip and Brendan, relatives and a wide circle of Defence Forces colleagues and friends.

Jim was a member of 33 Cadet Class 1959-60 and was posted to Collins Barracks, Dublin on commissioning. There he began a lifelong association with Eastern Command and Defence Forces Headquarters. He was the lieutenant in charge of the flag ceremony in that barracks for the specially filmed version of the National Anthem broadcast on the opening night of Telefís Éireann on 31 December 1961. This was subsequently broadcast at the closedown of each day’s transmission until 1966.

He served overseas with the United Nations in the Congo as Platoon Commander A Company 39 Infantry Battalion in 1963, as the Assistant Operations Officer 9 Infantry Group UNFICYP in Cyprus in 1967-1968, with UNTSO in 1973 during the Yom Kippur War, with OSCE in Vienna and with UNIKOM in Kuwait. He was a member of the eight officer Defence Forces reconnaissance party that visited Lebanon in preparation for Ireland’s deployment to UNIFIL in May 1978 and subsequently served there with 64 Infantry Battalion.

At home he was Officer Commanding 27 Infantry Battalion, 8 Infantry Battalion FCA and served as a Staff Officer with Eastern Command Infantry Force, thus maintaining strong links with the North-Eastern area of the Eastern Command. He was the first School Commandant of the United Nations Training School Ireland when it was established 25 years ago. An accomplished and pragmatic administrator, his was the advice that was sought by all when he served in ‘A’ Administration Section of the Adjutant General’s Branch.  It was given willingly, was always relevant, and placed the welfare of the soldier at its centre

May he Rest in Peace

Reposing at Fanagan’s Funeral Home, Lower Kimmage Road on Friday afternoon (16 November) from 3.30 pm to 5.30 pm (with prayers at 5.15 pm). Removal on Saturday morning (17 November) to St Mary’s Church, Julianstown, County Meath arriving for Funeral Mass at 11 am and afterwards to Moorechurch Cemetery.